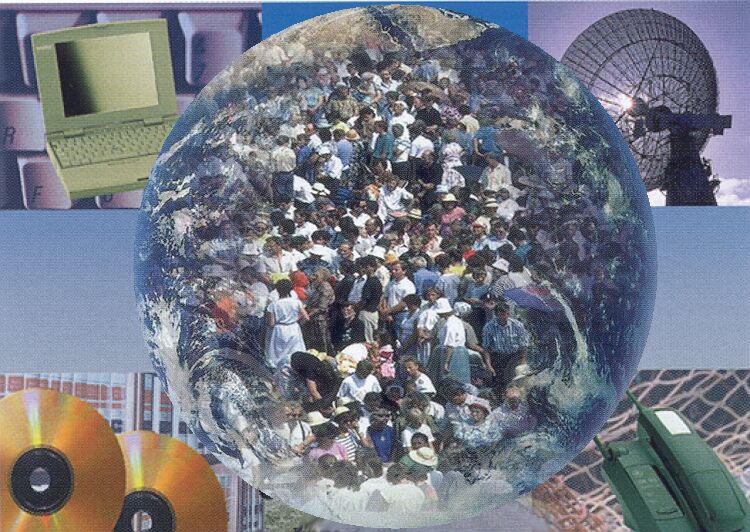 Maurice Strong, Secretary-General of the United Nations Conference on Environment and Development in 1992 (the Earth Summit, shown here at the right) endorsed our input to WSIS during PrepCom 3 in Sept. 03 in Geneva.

The Environment and ICT Working Group

We work on the impacts of Information and Communication Technologies (ICT) on the environment. This work is closely related to the new field of "environmental informatics", as explained in this book. As a Civil Society working group we have contributed input to the World Summit on the Information Society (WSIS).

Here is our first statement given at the second preparatory meeting, PrepCom 2, jointly by our partners Finkbeiner, Ruddy, Sippel and Weiler (see sections below "Core members" and "Update"). Our second statement was delivered to governments on 27th Feb.03. After the synthesis document was released, we issued this reminder to drafters of what parts of our input had not yet been included in the final declaration and action plan. Here is the current version of our input.

We value highly the scientific advisory capacity of such institutions as the Intergovernmental Panel on Cimate Change (IPCC) to United Nations negotiators. In the US the work of the IPCC was supported by the

UNEP's Governing Council has recently initiated a process to strengthen the scientific base of UNEP, referred to as "the Science Initiative."

On the national level in Switzerland we are participating in a new tripartite task force, and we have this report of the first meeting at the Swiss Office of Communication.

We have complained to drafters that the term "sustainable development" (SD) has become inflated. SD is explained in an entertaining way in the "dashboard" simulator. Try it out for yourself here. There is a larger collection of sustainability "dashboards" here.

We also serve as the Environment Caucus set up under the Civil Society Coordinating Group (CSCG) following PrepCom 1 of WSIS. The CSCG is explained in more detail on http://www.crisinfo.org/ in this MS Word file.

The caucus model originally proposed by CRIS is now combined with the "family model" concept at the Executive Secretariat. Two graphic representations of the various bodies involved have been done from a critical standpoint, constituting almost 5 MB in PDF, of which the second one at the bottom of this file is more instructive.

"Families" work with the new Civil Society Bureau to ensure that leading, must-have NGOs are involved when input to WSIS is solicited from NGOs through the caucuses. Here is Alain Clerc's official note dated 22 April 2003 on the topic of families: "Establishment of a Civil Society Bureau: A historic event!" The CS Bureau works through an emailing listserve with these public archives. Many of us are considered part of the "science and technology family" in civil society; currently one of us is from the private sector. The new family model for procedural issues has the family organized for science and technology led by the International Council of Scientific Unions (ICSU); ICSU has a part of its Website devoted to WSIS (see also the section headed "EMPA / SIT links" below), and the World Foundation of Engineering Organizations.

The civil society group said to possess the ultimate legitimacy, the CS plenary, speaks through a listserv, archives of which are publicly available here. Subscribing to Plenary is possible here. There is a list of WSIS lists at http://www.wsis-cs.org/ A list not listed there, providing for "discussion of governance-related topics around WSIS by the NGO of Computer Professionals for Social Responsibility (CPRS), including global communication governance and Internet governance" can be subscribed to here.

Write to us expressing your views on the Environment and ICT (Information and Communication Technologies), and whether you'd like to receive occasional postings from our e-mailing list. For instance, you could tell us what you propose to contribute to our initiative, and to receive from it. Contact: www_wsis@web.ethz.ch


Our Website is structured in the following sections, from each of which you can return here:


Do you want to participate in WSIS CO2 neutrally? You can find more information on how at www.clipp.org/wsis or at www.myclimate.org or in Germany at the Gold Standard www.atmosfair.de, in The Netherlands www.businessforclimate.nl and in the UK www.climatecare.org to mention a few.

Get listed in the European DataBank of Persons working in the field of Sustainable Development, www.sd-eudb.net

Consult this online directory of green organizations in Geneva in PDF

Disclaimer: Unless otherwise stated, any views expressed on these Webpages do not necessarily reflect those of the institutions at which the group members are employed.

This site is listed in a directory of science related Websites among "Environment resources".